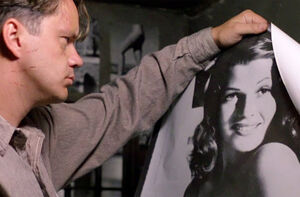 Appearing first as Rita Cansino, she agreed to change her name to Rita Hayworth and her natural dark brown hair color to dark red to attract a greater range of roles. Her appeal led to her being featured on the cover of Life magazine five times, beginning in 1940.

Hayworth appeared in a total of 61 films over 37 years. She is one of six women who have the distinction of having danced on screen with both Fred Astaire and Gene Kelly. She is listed by the American Film Institute as one of the 100 Greatest Stars of All Time.

Retrieved from "https://shawshank.fandom.com/wiki/Rita_Hayworth?oldid=6601"
Community content is available under CC-BY-SA unless otherwise noted.